By Joshua Riefman, published April 8th, 2022
At the dawn of the 20th century, the Russian Empire stretched from Warsaw in Central Europe to Vladivostok in the Far East of Asia. The illusion of Russian military hegemony was shattered when they were defeated by Japan in the century’s first years—their incompetency during the war was but a warning of what was to come. In 1914, any concept of peace in Europe collapsed as the world descended into the First World War. The Russian Empire, emerging from three centuries of nearly unchecked imperialist conquest and expansion, was woefully unprepared. After some initial success in East Prussia, the Russian Army began to crumble and barely avoided total collapse. Nevertheless, back home in the capital city things were even worse. The Russian government was a century or two out of date with too much power centralized under Tsar Nicholas II, who reigned as an absolute monarch. But, the Tsar wasn’t in the capital, he was far away with the army on the front lines; the absence in Petrograd’s Winter Palace left the empire captainless, and steering onto the rocks. 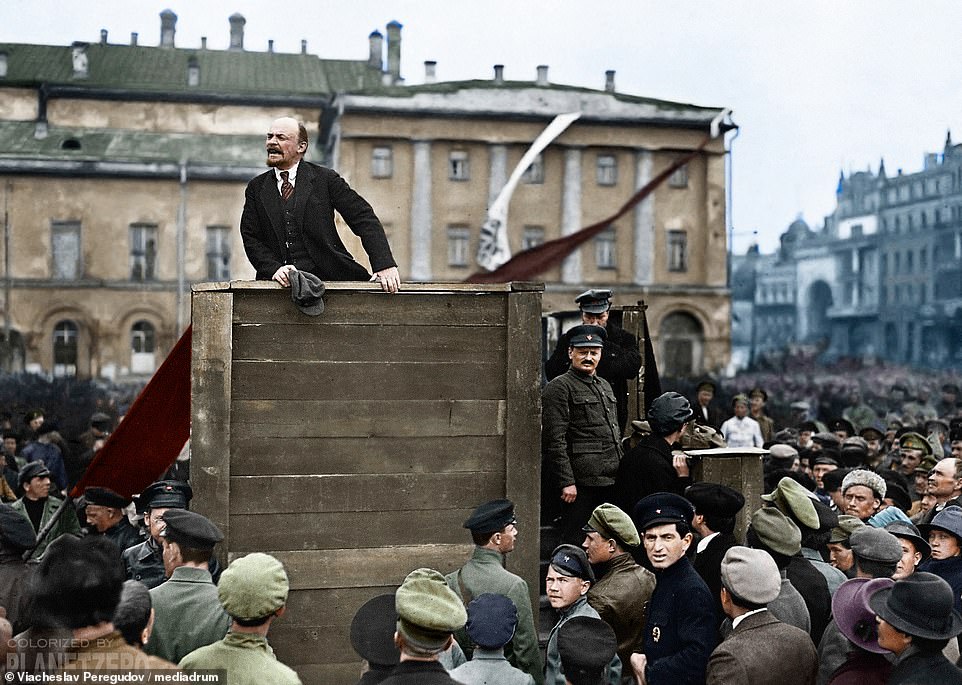 In the spring of 1917, what was initially a worker’s strike was left unchecked until it spiraled into full-blown revolution, which the war-exhausted army—hundreds of kilometers away and of questionable loyalty—was not trusted to suppress. After a myopic response by the Tsar and his supporters in the conservative faction of the government, he was forced to abdicate the throne; after centuries of rule the Romanov monarchy was overthrown. The chaos was barely beginning. Months later, the communist Bolsheviks under the command of Vladimir Lenin seized control with an armed insurrection in the bloodied capital, known as the October Revolution. Yet, their radicalism ensured that they had fierce opposition, including many who supported the restoration of the Old Regime. However, with the Bolsheviks seizing control over the most developed parts of Russia, their opposition, known as the Whites, required foreign support which they failed to acquire from the equally war-torn Western powers. The October Revolution became the first act in what cascaded into the Russian Civil War. When the dust settled, the Bolshevik Red Army had complete control over the country.  What followed, and my apologies for the spoilers if you haven’t gotten to that episode of world history, was the Soviet Union, the advent of communism, and the Cold War. The chance at liberty in Russia didn’t die with thunderous applause, or incessant tantrums about election fraud, but with the crack of gunshots against jewel-lined garments in the Romanovs’ last home in snowy, quiet Yekaterinburg where they were executed. 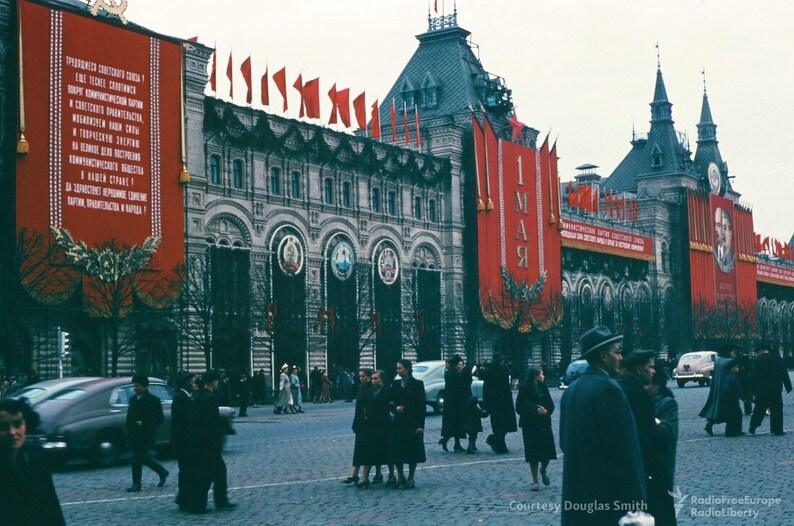 Moscow, the Soviet capital, during 1954
Just under seventy years later during 1991, after decades of relentless decline resulting in a coup, the Soviet Union gradually collapsed. In the morning of December 25th, General Secretary Mikhael Gorbachev announced his resignation. The Soviet flag was lowered as the Russian flag ascended over the Moscow Kremlin, and what was a global superpower was fifteen independent countries, and four new nuclear powers. And then everything fell apart, again. The economies of the former Soviet republics faced cataclysmic collapse: inflation rose by five-digits, production was crippled, income inequality soared, GDP was halved or worse, even life expectancy tumbled. Nonetheless, at the center of the Soviet empire’s corpse—unstable, unpredictable, and antagonistic—was Russia. For the purposes of global peace, a world with few nations in possession of nuclear weapons is a safe world. Thus, along with the United Kingdom and the new Russian Federation, the United States entered into a multitude of agreements—most notably the Budapest Memorandum—where Russia agreed to respect the territorial sovereignty of the former republics in exchange for them dismantling, or ceding their nuclear weapons to Russia. The policy was successful, and all Soviet nuclear weaponry was transferred to Russia or destroyed. Gorbachev resigns, accepting the dissolution of the Soviet Union
Russia has not held up their end of the agreement. In 2014, Russian forces invaded and annexed the Ukrainian territory of Crimea, a peninsula which importantly contains the critical Black Sea port of Sevastopol. The annexation has been widely condemned by the international community, but it wasn’t the end. Months later the Donbas war began where Russian-backed rebels declared the independence of the Donetsk and Luhansk regions of Ukraine that lie along the Russian border.
The Northern European plain, the flat land which flows from Paris to Berlin to Moscow, acts like a funnel for foreign troops to come plundering into Moscow—the heart of the country. This vulnerability has been historically countered by controlling the vast tracts of land between Russia’s enemies in the West and her heartland. However, since the collapse of the Soviet Union, the buffer states of Belarus and Ukraine have been out of Moscow’s direct rule. While Belarus—home to Europe’s last dictator, Alexander Lukashenko—has more or less fallen into line behind Moscow, Ukraine has been drifting westwards with the clear ambition to be a part of NATO and even the European Union; either occurring would be nothing less than crippling to Russian jingoist ambitions. Thus, it could be speculated that the purpose of Russia’s invasion and apparent desire to annex the ex-Soviet republic is to restore Russia’s safety. However, it is likely that the true reason is more insidious. 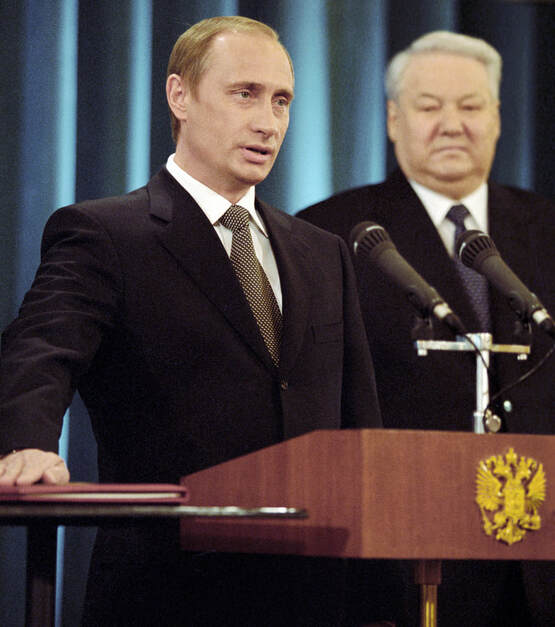 Vladimir Putin is inaugurated as Russian President
The Moscow Kremlin is ruled by President Vladimir Putin, who succeeded Boris Yeltsin after his failure to lead Russia through the post-Soviet depression; Putin has gradually transformed the office into a veiled dictatorship. Alarmingly, Putin believes that the collapse of the Soviet Union is the greatest tragedy in recent history. Thus, it is evident that the many geopolitical moves made by the ersatz president in the past decades are in the goal of restoring Russia’s prestige and power that the Soviet Union enjoyed. In brief, Vladimir Putin believes that Russia deserves nothing less than to be a superpower again, thus he wants to restore the Russian Empire and their era of ardent imperialism. Ukraine, home to forty million people, was the second most powerful Soviet republic—after only Russia herself—and thus the annexation of Ukraine would be necessary to Putin’s restoration of a Russian empire. Ukrainian annexation could be a springboard to the reintegration of all the territory that Vladimir Putin considers to be de jure Russian.
Is the annexation of Ukraine even achievable? Russia’s military is doubtless superior to the Ukrainian military. But, as the many imperialist wars fought by both the Soviet Union and the United States of America proved, the capacity to defeat a country’s conventional military does not translate to a smooth, peaceful occupation. Russia commands barely a tenth of the soldiers that the Soviet Union used to defeat Nazi Germany, and Russia’s own adventures in the Chechen Wars demonstrate how difficult it was for Russia to subdue Chechnya, a rebel state within their borders with less than half of the population of the just the Ukrainian capital, Kyiv. Western nations have been sending aid to Ukraine over the past weeks, whether soldiers, money, weapons, officers, or training. Not even the Kremlin’s deep pockets may not be able to afford a protracted war.

Early in the morning on Thursday, February 24th, 2022, Vladimir Putin declared war on Ukraine, and the Russian Army invaded on four fronts. Russian forces invaded from Crimea into Kherson and Mariupol, from the border into Kharkiv and Chernihiv, but most importantly from Belarus’s border in the north. Their aggressive push through Chernobyl from the Belarussian border makes it evident that Russia is pushing for a swift capture of the Ukrainian capital, Kyiv, in an attempt to decapitate Ukraine’s Western-leaning government. This seems to suggest that their goal is not outright annexation of the territory, but rather the installation of a Russian ally in Kyiv; Ukraine would be but a couple pen strokes from becoming a Russian vassal once more. Photos by Felipe Dana/AP, Vadim Ghirda/AP
What else is evident is that Russia is bleeding. When it became evident that Russia was going to invade, the world made it clear that they expected Ukraine’s military to collapse under the weight of the vaunted Russian Army, said to be the second most powerful in the world. The world was wrong. Ukrainian forces are offering fierce resistance on all fronts, which has seemingly blunted the invasion force despite territorial concessions. Ukraine is using the same tactics that the Soviet Union used against Nazi Germany, conceding vast tracts of land for tactical advantage, to devastating effect against the Russian invaders. Russia has suffered devastating casualties in a rather short period of time. The performance of Russian equipment has been nothing less than embarrassing, and the failure of many Russian supply lines indicate their own surprise at Ukrainian resistance. In Kyiv, Russian attempts to capture the city have been so far repulsed, and the city has enacted levée en masse, arming civilians with assault rifles in preparation for battle in fervent defense of the capital.
Russia is bleeding more than blood, however. While western powers are rightfully hesitating to militarily intervene in the conflict in an attempt to prevent any sort of third world war, they are striking Russia with monstrous sanctions. Russia is being effectively isolated from trading with the West, and even being banned from participating in what is known as SWIFT, the banking system that is the standard for international money transfers; Russia’s removal from SWIFT means they’re forced to return to the briefcase-full-of-money method of transferring money internationally. Barely a week into the conflict, and Russia’s already feeble economy is showing signs of cracking under the ceaseless barrage of sanctions that continue to pile up. Their currency, the ruble, has lost half its value, banks are closed, the Russian stock market has collapsed, Russian billionaires have lost $39 billion USD in a single day, and Russian bank accounts are being frozen or seized across the world. Fatally, even bankruptcy is looming as the Russian economy inches closer towards capitulation; they are expected to default on many debts in the following months. 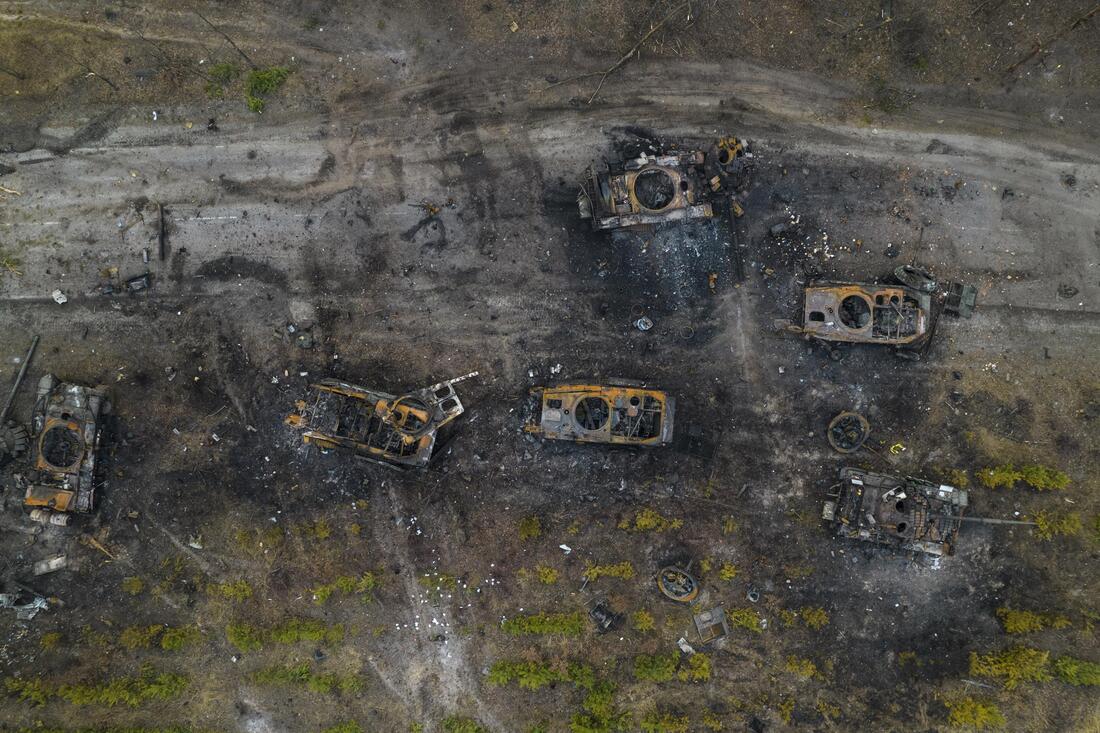 Destroyed Russian tanks, photo by AP
Not even Vladimir Putin himself is sure how the world is going to look when this war is over. What is sure is that all-out war between Russia and the west is practically impossible; nobody is interested in ending civilization over Ukraine. Against all odds, Ukrainian forces to date seem to be successfully defending the capital and the country from Russia’s invasion. Russia’s military has been revealed to be much more of a paper tiger than anything else, a house of cards built of corruption and sycophancy, crumbling under the weight of modern warfare.
Nonetheless, the Ukrainian population have signed in blood their intention to fight—they will not go quietly into that good night.