John McCrae Isn't the Only War Poet We Should Remember​

By Shannon Curley, published January 23rd, 2022
Every Remembrance Day, John McCrae’s immortal description of the battlefields of Flanders, speckled with crimson poppies and endless rows of rudimentary graves, is recited. Despite presumably having heard this poem every year, many people remain unaware that McCrae was only one of the many soldiers that documented their miserable years in the trenches through poetry. Among this generation of poets were Wilfred Owen and Siegfried Sassoon, who spent countless dreary weeks half drowning in mud as they composed some of the most nightmarish lines in English verse.
"In all my dreams before my helpless sight
He plunges at me, guttering, choking, drowning.”
-Wilfred Owen, Dulce et Decorum Est
Wilfred Owen was only 22 when he enlisted to fight in 1915, and was quick to discover the horrors of war. He began to experience “shell shock” (known today as PTSD) in 1917, and after spending time in England to recover, he returned to France and died on the 4th of November, 1918; only a week before the signing of the armistice. His poetry carries an obvious stance of opposition to the war and displays honest sentiments towards it: fear, frustration and hopelessness.
“You are too young to fall asleep for ever;
And when you sleep you remind me of the dead.”
-Siegfried Sassoon, The Dug-Out
Siegfried Sassoon, a close friend (and probable romantic partner) of Owen, faced similar experiences during the war and had an comparable outlook on the conflict. After being wounded in action, he wrote a letter to the British Department of War in protest of the violence. The poetry of Sassoon took on a significantly more bitter tone, openly criticizing those in support of the war. He too suffered from “shell shock,” however Sassoon survived the war and died in 1967. ​
Their poems, unlike those of McCrae, accurately reflect the lives and emotions of those who fought in the war due to the time they spent witnessing trench warfare first hand. Despite reflecting the agonizing grief of losing friends and loved ones, In Flanders Fields lacks the horrifying imagery so common in poems from the era. The poem paints a somewhat positive image of war in comparison to the works of Sassoon and Owen.
The poetry of Owen and Sassoon remains relevant to this day, and allows us to relive the experiences of soldiers over a century later. The violence they faced in battle and the emotions they experienced persist, and their poems mourn the very same people we mourn every Remembrance Day. Though the poetry of John McCrae reminds us of the importance of honouring the dead, the poetry of Wilfred Owen and Siegfried Sasson reminds us that war is to be criticized, mourned, and learned from, rather than to be glorified. As Sassoon says of those who glorify war in Suicide in the Trenches,
“Sneak home and pray you'll never know
The hell where youth and laughter go.” 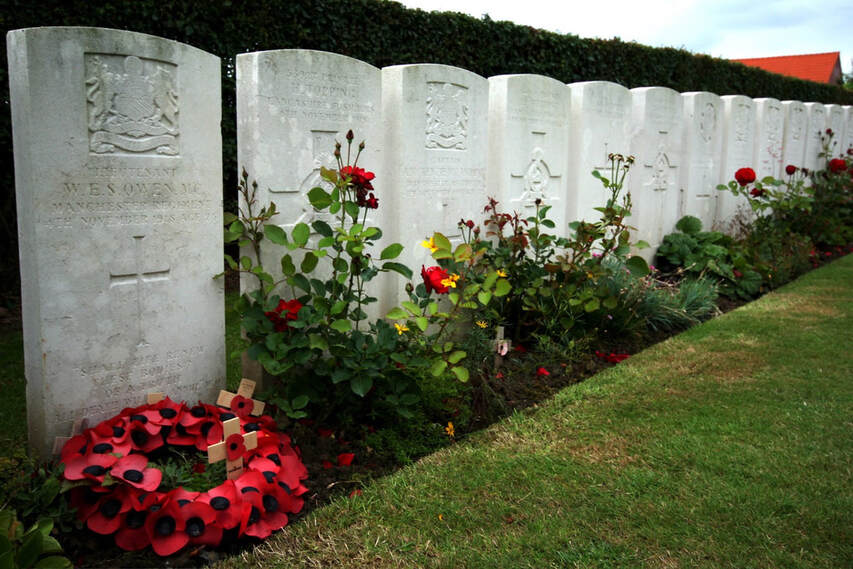 A wreath is placed at the grave of Wilfred Owen in Ors Community Cemetery, France. Photo by Kate Lindsay via The First World War Poetry Digital Archive.